I’m quite sure these are either American Golden-Plovers or Pacific Golden-Plovers. Their flocking, feeding and flight pattern fascinated me, and Jello thought they were fun to chase!

Though they stirred into flight when disturbed, the group moved only a few yards away then landed — almost in unison — and continued to forage. 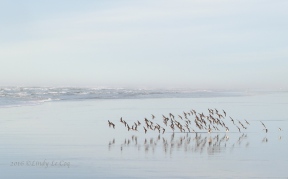 While Golden-Plovers forage in small flocks, Snowy Plovers generally hunt alone. Three arrived together when I first saw them this morning.

By the time I could zoom in, they had moved off in different directions. I felt fortunate to get these few clear shots of one Snowy Plover.

If it’s in the air (or can get there) and is from nature, it’s a Friday Flyer!

“Plovers stand alert and upright watching for prey, then run quickly to another spot. [Sometimes they] employ a trick known as “foot trembling” in which they stand still on one leg with the other foot held loosely, slightly forward, and vibrating against the ground. Presumably this affects prey in some way, either scaring concealed prey out of hiding or attracting prey to the vibrations. At other times, they just stand and wait; when prey is sighted close by, they dip abruptly to peck at it.” (The Sibley Field Guide to Birds of Western North America; David Allen Sibley 2003.)