When first introduced to Torquay pottery, I loved its rustic look. Through the years, my collection grew, and in my research I’ve learned that some pieces truly are antiques. 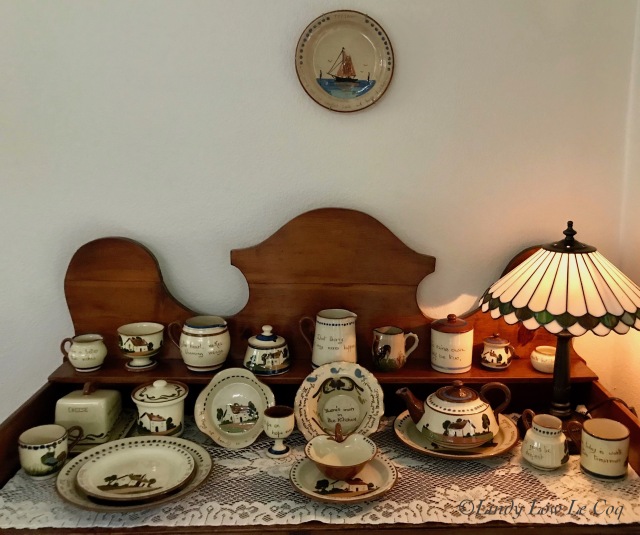 The name Torquay is given to ceramics by several potteries working near Torquay, England, from 1870 until 1962. So, some of my items are old, some are newer, and all but one are accented with distinctive blue dots or lines.

Whether old or new, they all have characteristic designs with scenes of cottages, ships, birds, or flowers, and proverbs that remind us how to go about living a good life.

The rooster tea cup (Droon yer sorrows in a cup o Tea) is from Longpark, c. 1920-1930. Though most pieces have marks, many simply say Made in England, so identifying the original maker and year is difficult.

The one piece with no blue on it is from Watcombe c. 1901-1920, and is the oldest in my collection. With a name like Le Coq, this rooster crowing Bon-jour was a true find!

In less than a month, my hubby and I will celebrate our 50th or “golden” anniversary. Patti’s theme, one so often connected to weddings, was a sweet reminder of years gone by!