Recently I visited the Albany Carousel and was charmed beyond words. The first three shots are examples of filling the frame with the subject. The third photo also is an example of how ‘the whole’ can sometimes be overwhelming! In the fourth shot, I bring us a little closer, though it is still quite busy, and in the next two shots I fill the frame with close-ups of Harriett the Frog.

Lovely structure with an inviting entrance.

On the door, a welcoming committee! 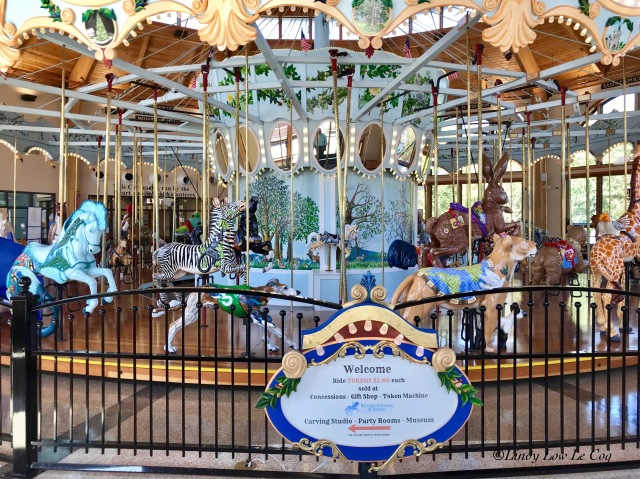 “The Albany Carousel is fortunate to have a 1909 Dentzel Carousel Corporation mechanism donated to our project….Bill Dentzel, great grandson of Gustav Dentzel the founder of Dentzel Carousel Corporation, heard of our project and arranged for the antique mechanism to be donated to us….This classic mechanism has taken over ten years to restore to working order, every wooden gear tooth, every mirror panel, every motor that turns the carousel platform, has been meticulously restored.” 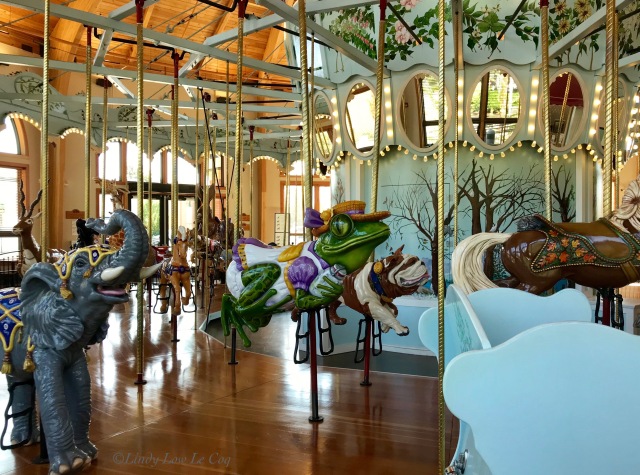 “This carousel will consist of 52 animals and, being a menagerie style unit, will have a variety ranging from a seven foot plus tall giraffe, dogs, cats, zebras, unicorns, dragons, and yes, even lions, tigers, and bears, (oh my just to name a few)! The animals will be situated on three rows, where the outside row (large animals) will be “standers” while the middle and inside row animals (medium and small sized respectively) will be “jumpers”. Each row will also have two replacement animals and there is also five seasonal animals planned, bringing our total to sixty-three animals.”

Harriette the Frog is perhaps the most whimsical animal on the Carousel. She is certainly the most “ribbit-ing”. Harriette was adopted in loving memory by the family of Anna Harriette Murphy, remembered here by her surviving children…. Every detail on Harriette is symbolic of some aspect of Anna H. Murphy’s life, even down to a frog being chosen to represent her….Anna had a porcelain frog collection numbering almost 200 thus making the animal a natural choice…. Harriette is wearing a straw hat – something Anna always wore while gardening. In addition, Harriette has 12 tadpoles on her pinafore (six on each side) which represent each of her 12 children. The yellow rose was her favorite flower. Her purple dress is based on her favorite color.

Anna grew up during the Great Depression and, like many folks, she made her own clothes and canned fresh produce. Harriette’s bloomers, like Anna’s, were made out of flour sacks. And since frogs don’t eat canned food, Harriette is carrying a canning jar full of fireflies. Yum. Anna loved to catch fireflies as a child in Minnesota.”

While the shot below provides an overview of some of the antique museum pieces, getting the rabbit “full frame” brings the whimsy and fun of it to life.

“The Dentzels were the first manufacturer of carousels in America, opening their business in Philadelphia, PA back in 1870. They are a vastly important link to carousels in America and we are fortunate to have their kind support…. The Dentzel family has loaned several beautiful and unique pieces of American carousel history to our project.”

Albany is about ten miles northeast of Corvallis, Oregon, home of Oregon State University. If you are ever in the area, the Albany Carousel is a delightful place to visit! Thank you Patti for an opportunity to shine a light on this all volunteer community effort. Each of the animals has a sponsor who works with the wood crafter to arrive at a design and pattern. All are hand carved and hand painted in the museum’s workshops.