My sister, Diana and I participated in a viewing of the reclusive Sandhill Cranes that took place in a blind established at the Ridgefield National Wildlife Refuge (RNWR) just 20 miles northwest of my home.

You can see the blind on the left as we hiked into the area.

We were part of a 30 person group who were transported by van through gated/no public access roads, then walked about a quarter mile (half k) to the viewing site. 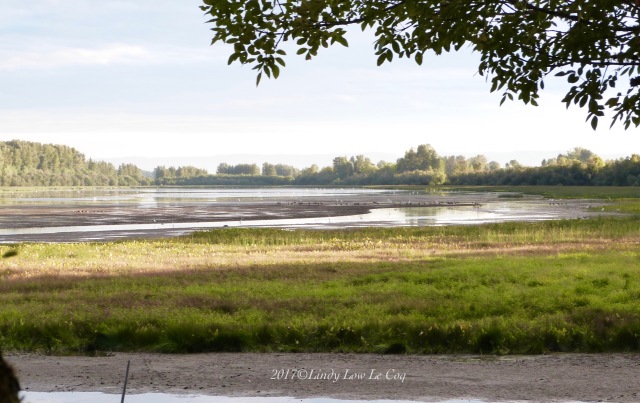 Cranes and friends on mudflat.

In other parts of the country, Sandhill Cranes are gregarious — not so in the Pacific Northwest where they are uncommon, and will leave the area if disturbed by humans.

A flock just arrived to join the three I was able to get in focus!

Thousands of Sandhill Cranes migrate through the Pacific Northwest in spring and fall. Diana and I had promised ourselves this adventure for three years — now we’re hooked! At dusk, as the group walked out more cranes flew in.  These photos are the best I could get with movement and low light.

Walking back after anything but a pedestrian experience!